Edit
watch 02:34
Fire Emblem Warriors: Three Hopes - The Loop
Do you like this video?
Play Sound 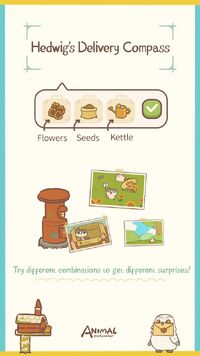 There are currently 143 letters, including 22 Permissions to Raise Prices letters. Some letters are time-specific and cannot be obtained through Hedwig.
Mailbox type, the order of items and the flowers' level do NOT improve or decrease the chance of getting letter.

For each letter, there are multiple available combinations. Likewise, one combination can work for multiple letters.

Some letters have a very low chance of occurring and require a lot of attempts even with the correct combination to acquire, ex.: Coconut Cassia Wine, Taiyaki or Shiba Puppy's Letter. Some players needed up to 50 tries to get those letters.

Letter From The Department Of Education[]

Stamp & Puzzle Event letter.
This is an one-time event-limited letter and it can not be obtained again afterward.

Community content is available under CC-BY-SA unless otherwise noted.
Advertisement