Main article: Halloween Event
During the Halloween event, candies were randomly thrown in the Restaurant by the Halloween Pumpkin. The rewards are given after the player serves a certain amount of Halloween customers with the candies.

Main article: Christmas Event
During the Christmas event, player can collect decorations from their friend's restaurants and their own restaurant to fill the Christmas pictures. Different rewards are given for each filled picture. 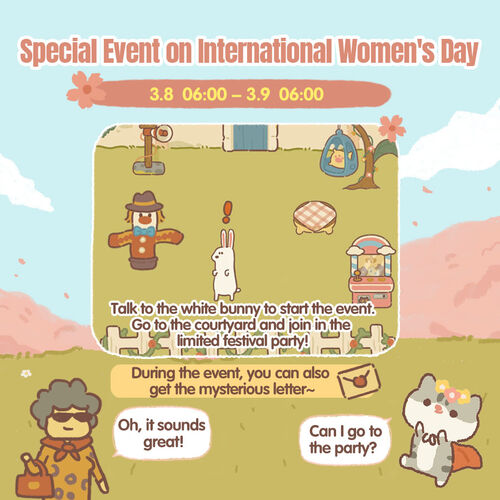 International Women's Day event starts from March 8th 06:00 to March 9th 06:00. On this day, players can start the event by talking to White Bunny in the Courtyard. A group of special characters will visit and leave rewards after the event is done. Additionally players will receive a special letter on this day: Eggy's Diary 15

Main article: Children's Day Event
During the Children's Day's event you will a special letter delivered by Messenger Hedwig. There will be new toys and dolls as well as new customer to collect and participate in the event.

Dragon Boat Festival, also known as Duanwu Festival, is a traditional and important celebration in China. The event occurs on the 5th day of the 5th month of the Chinese Calendar, which is usually around end of May to mid June on Gregorian calendar. For this event, a few very rare Mementos from the Gachapon have an increased chance of being obtained.

Hello bosses, the 1st anniversary is coming! Event begins September 18th 2020 at midnight and ends September 30th 2020 at 11:59pm. During the Anniversary event: 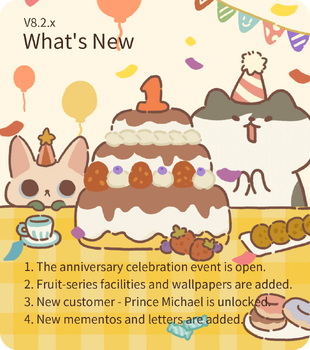 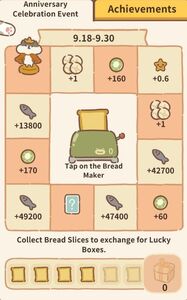 Answer all questions correctly to obtain the limited memento to unlock the limited recipe!

To answer the question the player has to collect tickets from customers, they all have a small chance of dropping tickets. There are 3 question stages and each stage consists of 5 questions. Stage 1 requires 5 tickets, stage 2 requires 10 tickets and stage 3 requires 25 tickets.

Each question has 3 choices. If the player answers a question incorrectly they can get another chance by sharing the game. After answering all questions for a stage correctly the player will get a small amount of tickets.

The reward for answering all questions correctly is the Piping Bag memento,

20 and with it the player can buy the Purr-fect Choclate Cake recipe.

After the event is over, the memento Piping Bag is obtainable from the Gachapon.

Community content is available under CC-BY-SA unless otherwise noted.