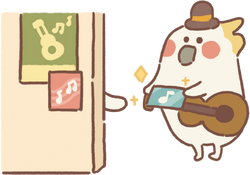 The Courtyard Concert Expansion is one of the upgrades available for the restaurant. This upgrade introduces a new area where Musicians can perform and get earning and tips from fans. The player can buy Facilities to customize the area and improve their income. Invites can be obtained by many ways:

Callback can be bought with

films or can be earn through watching ad. There are maximum of 5 ads per day and each ad gives ad gives

Callback can only be used if a musician has fulfilled their callback hours during supporting act. The callback requirement is listed on their corresponding page.

To see all the facilities in this area, go to: Facilities/Concert.

12 new musicians are added to the concert area. Each has performance earnings per minute, either

Cod. During their show, their fans who are called with Gather will tips with

Cod. The tips can be accessed through the Ticket Booth.

To maximize profit, it's best to gather once or twice during the show.

Player can unlock the next musician by inviting a supporting act. Under the same light, each musician has a chance of inviting certain other musicians in their band and from different band, who they have a close relationship with. For which character a musician can invite after their show, visit their corresponding page under: *Close relationship Performer(s)*

Once at capacity of one or both of those currency, you can not invite or callback a performer until claimed.
Each of the ticket booth adds additional spots for tips from customers while the performers are active. Initially the player has space for 10 tips and the possibly to expand this to 30 tips when all current ticket booths have been purchased. Tips earned over the maximum spot for tips will be lost if the player does not claim them.

During the performance, the player can select one of the following poster to increase the income of the musician(s) on the poster.

Community content is available under CC-BY-SA unless otherwise noted.